This blog will walk you through the Apache Airflow architecture on OpenShift. We are going to discuss the function of the individual Airflow components and how they can be deployed to OpenShift. This article focuses on the latest Apache Airflow version 1.10.12.

The three main components of Apache Airflow are the Webserver, Scheduler, and Workers. The Webserver provides the Web UI which is the Airflow’s main user interface. It allows users to visualize their DAGs (Directed Acyclic Graph) and control the execution of their DAGs. In addition to the Web UI, the Webserver also provides an experimental REST API that allows controlling Airflow programatically as opposed to through the Web UI. The second component — the Airflow Scheduler — orchestrates the execution of DAGs by starting the DAG tasks at the right time and in the right order. Both Airflow Webserver and Scheduler are long-running services. On the other hand, Airflow Workers — the last of the three main components — run as ephemeral pods. They are created by the Kubernetes Executor and their sole purpose is to execute a single DAG task. After the task execution is complete, the Worker pod is deleted. The following diagram depicts the Aiflow architecture on OpenShift: 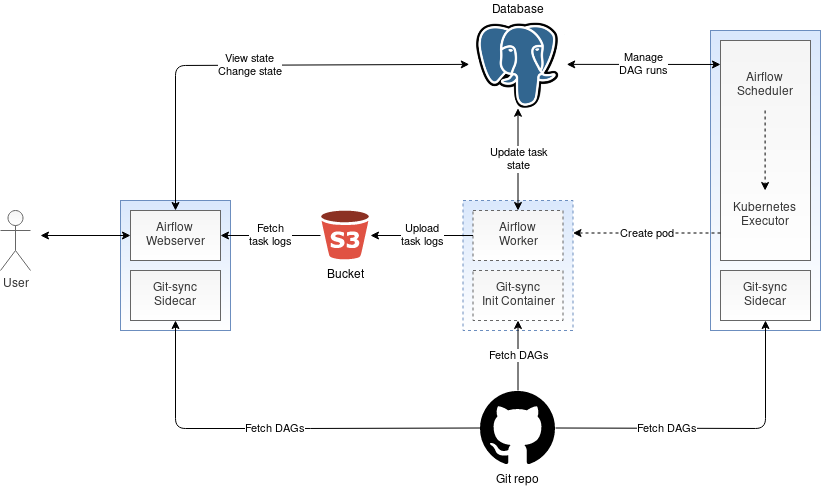 The shared database architecture provides Airflow components with a perfectly consistent view of the current state. On the other hand, as the number of tasks to execute grows, the database becomes a performance bottleneck as more and more Workers connect to the database. To alleviate the load on the database, a connection pool like PgBouncer may be deployed in front of the database. The pool manages a relatively small amount of database connections which are re-used to serve requests of different Workers.

Regarding the choice of a particular DBMS, in production deployments the database of choice is typically PostgreSQL or MySQL. You can choose to run the database directly on OpenShift. In that case, you will need to put it on an RWO (ReadWriteOnce) persistent volume provided for example by OpenShift Container Storage. Or, you can use an external database. For instance, if you are hosting OpenShift on top of AWS, you can leverage a fully managed database provided by Amazon RDS.

All three Airflow components Webserver, Scheduler, and Workers assume that the DAG definitions can be read from the local filesystem. The question is, how to make the DAGs available on the local filesystem in the container? There are two approaches to achieve this. In the first approach, a shared volume is created to hold all the DAGs. This volume is then attached to the Airflow pods. The second approach assumes that your DAGs are hosted in a git repository. A sidecar container is deployed along with the Airflow Server and Scheduler. This sidecar container synchronizes the latest version of your DAGs with the local filesystem periodically. For the Worker pods, the pulling of the DAGs from the git repository is done only once by the init container before the Worker is brought up.

To synchronize the DAGs with the local filesystem, I personally prefer using git-sync over the shared volumes approach. First, you want to keep you DAGs in the source control anyway to facilitate the development of the DAGs. Second, git-sync seems to be easier to troubleshoot and recover in the case of failure.

By default, Apache Airflow writes the logs to the local filesystem. If you have an RWX (ReadWriteMany) persistent volume available, you can attach it to the Webserver, Scheduler, and Worker pods to capture the logs. As the Worker logs are written to the shared volume, they are instantly accessible by the Webserver. This allows for viewing the logs live in the Web UI.

An alternative approach to handling the Airflow logs is to enable remote logging. With remote logging, the Worker logs can be pushed to the remote location like S3. The logs are then grabbed from S3 by the Webserver to display them in the Web UI. Note that when using an object store as your remote location, the Worker logs are uploaded to the object store only after the task run is complete. That means that you won’t be able to view the logs live in the Web UI while the task is still running.

The remote logging feature in Airflow takes care of the Worker logs. How can you handle Webserver and Scheduler logs when not using a persistent volume? You can configure Airflow to dump the logs to stdout. The OpenShift logging will collect the logs and send them to the central location.

Apache Airflow can be deployed in several different ways. What is your favorite architecture for deploying Airflow? I would like to hear about your approach. If you have any further questions or comments, please add them to the comment section below.