In this blog post, I am going to show you how to use Tilt to facilitate local OpenShift development. Tilt’s capabilities will be demonstrated in a practical example that uses buildah and CodeReady Containers. If you develop containerized applications on OpenShift, this blog post is for you.

How does Tilt facilitate local development?

The diagram below depicts a development workflow orchestrated by Tilt. After you execute the tilt up command on your development machine, Tilt will keep running while performing the following actions: 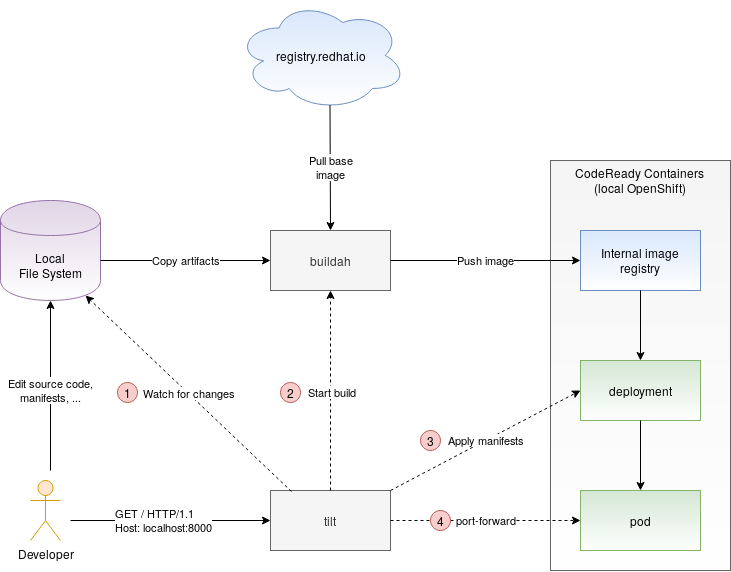 Tilt helps the developer automate many of the manual steps made during the development of containerized applications. It speeds up the edit-compile-run loop considerably. Interested to trying it out? Follow me to the next section, where we will implement the workflow depicted in the above diagram.

In this section, we are going to use Tilt to orchestrate the development of a sample application. As I didn’t want to reinvent the wheel by designing a custom application, I grabbed the Plain Old Static HTML example that comes with Tilt and can be found on GitHub. This example is described in the Tilt’s documentation and you may already be familiar with it. It consists of a very simple shell script that serves a static HTML. In contrast to Tilt’s example which leverages Docker and upstream Kubernetes, I will be using developer tools from the Red Hat’s portfolio:

In order to be able to use the Red Hat developer tools, I had to modify the original sample code. The sample code used in this tutorial can be found on GitHub. I recommend that you go ahead and briefly review it.

Having the required tools in place, let’s start by logging in into CRC and creating a new project:

Let’s now focus on configuring buildah to be able the pull and push images from the container registries. As you can see in the Dockerfile, our application uses the registry.redhat.io/ubi8/ubi container image as the base image. In order for buildah to be able to pull this image from the registry, we need to log in to this registry using the Red Hat Customer Portal credentials:

In order for buildah to be able to push images into the CRC registry, we need to log in to this registry. For that, use the oc command to grab a token used for authentication against the registry:

Log in to the registry using the authentication token:

After successfully logging into the CRC internal registry, the buildah configuration is now complete. Finally, we can turn our attention to Tilt. First, let’s review the Tiltfile which describes how Tilt will orchestrate our development workflow:

I annotated the Tiltfile with comments that explain the meaning of individual Tilt instructions. Ready to give it a shot? Just clone the git repository and run Tilt:

After Tilt comes up, it will call buildah to pull the base image, build the application, and push the resulting image to the CRC internal registry. It will also deploy the application on Kubernetes by applying the kubernetes.yaml manifest referenced in the Tiltfile. If everything worked well, and the application pod starts up, you will see the “Serving files on port 8000” log message in the bottom pane:

At this point, you should be able to reach the running application on localhost:8000:

To experience how Tilt facilitates the local development, change the content of the index.html file. After you save your changes, Tilt will instantly re-run the loop and deploy the updated application.

In this blog, we described how Tilt can facilitate the local development of containerized applications. We demonstrated Tilt’s capabilities in a practical example that showed Tilt working along with buildah and CodeReady Containers. In this introductory article, we were able to only scratch the surface. There is much more that Tilt has to offer, including live updates that can update the application without restarting the container, and which can drastically speed up the edit-compile-run loop. I encourage you to read through Tilt’s documentation to learn more about this tool.

Do you use Tilt for development on OpenShift or Kubernetes? What’s your opinion on Tilt? I would be happy to hear about your experiences. You can leave your comments in the comment section below.