It has been 18 months since we deployed OpenStack cloud in our company. In this article, I would like to review our time with OpenStack and describe some of the experience we gained. Are you thinking about building an OpenStack-based cloud? This article might provide you with additional insights and tips that will help you succeed.

Right at the beginning, I’d like to say that our company is not a cloud provider. We didn’t build a cloud to provide a service to customers. Instead, we built a private cloud to support our engineering team in their software development efforts. Our OpenStack is running development machines, build machines and test machines. The requirements on the availability and reliability of our OpenStack cluster are therefore lower than the requirements that a public cloud would have to meet.

We started evaluating OpenStack around the Kilo release and ended up going with Mitaka into production. Around that time, Internet was flooded with articles criticizing the complexity of OpenStack including scary stories of companies failing their OpenStack projects. I can confirm that deploying OpenStack was a real challenge and that as we were working on it, the OpenStack version of the Kennedy’s famous words passed through my mind several times:

However, nothing can scare away a proficent software practitioner. Eventually, we got the job done and the invested effort did pay off.

OpenStack is an open-source infrastructure-as-a-service (IaaS) cloud platform. It’s important to understand that OpenStack itself is only a controlling layer that relies on other software projects to provide the implementation of the underlying functionality. For instance, OpenStack can spin up virtual machines, however, you would not find any code in the OpenStack project that would actually implement a hypervisor. Instead, OpenStack integrates with an existing hypervisor software to do the job. A very popular choice of the hypervisor used along with OpenStack is KVM and so when the user creates a virtual machine on OpenStack, OpenStack merely calls the KVM hypervisor to spin up the virtual machine. The same holds true for other areas of OpenStack functionality like networking and storage where OpenStack drives the underlying networking and storage software to do the actual job.

When planning an OpenStack cluster, you will have to choose from a variety of underlying technologies. For instance, in addition to the KVM hypervisor, OpenStack also supports Xen, VMware vSphere and Hyper-V. Most of the time you will just pick the technology you already run at your place and for which you have the staff to manage it. The freedom of choice you have with OpenStack is amazing, however, I would recommend to always look at the most popular choices first because their integration with OpenStack tends to be more solid. In our case, we chose KVM as a hypervisor, Open vSwitch as a networking implementation and Ceph to provide object and block storage.

OpenStack is an umbrella project under which you can find a host of projects each dealing with a different portion of the cloud functionality. The core projects that one can find installed in the majority of OpenStack deployments are:

Additionally, project Heat, Swift, and Ceilometer are also rather popular. You can find plenty of other OpenStack projects listed on the Project navigator page. When choosing OpenStack projects for your deployment, you should always consider the adoption and the maturity of the projects. Many projects on the list are still in the early stages of development and not ready for production use.

OpenStack was designed for massive scale deployments as you can tell if you look at the OpenStack architecture diagram. Each OpenStack project consists of multiple services (daemons) that can be deployed on separate physical machines allowing OpenStack to scale out. OpenStack services communicate with each other over the network using RESTful APIs. In addition, some of the projects like Nova, Neutron and Cinder chose to leverage a message broker for internal communication. The high number of services that form an OpenStack deployment contributes to its operational complexity.

Getting started with OpenStack

OpenStack is a fast moving project with two major releases per year. Especially in the past, the project documentation could not keep up with the many changes packed in each release. The documentation was outdated on many places or was missing altogether. When working with OpenStack I quickly realized that reading the OpenStack’s Python code was necessary in order to understand how some of the configuration options worked or when troubleshooting various issues.

Ability to read the OpenStack source code was required to succeed.

OpenStack is written using a beautiful idiomatic Python code which was most of the time a pleasure to read. At first, I started walking through the code of simpler projects like Glance and learned the patterns that were commonly used in other OpenStack projects, too. Only later I dived deeper into the internals of Nova, the OpenStack’s brain that schedules and creates virtual machines. When between OpenStack releases configuration options were renamed or moved to different INI file sections, I just grepped through the source code and learned about the changes avoiding any further frustration.

There are several OpenStack distributions available out there. For us the choice was pretty straight forward. As we are a Red Hat shop, we went with RDO installed on top of RHEL7. I spent large amounts of time working with RDO and yeah, it was challenging, at least in its Mitaka release. For further details on our experience with OpenStack RDO, you can refer to articles: 1, 2. Due to the complexity of OpenStack, it is rather difficult to create a tool to manage its life-cycle and I’m certain that further development effort will have to be spent before reaching perfection.

By the way, some OpenStack distributions come with a GUI-based installer. As there are dozens of configuration parameters to set during the installation, I don’t see the point of using a graphical interface to do this. Instead, a well commented configuration file seems more desirable to me. Does the GUI-based installer enable product managers to make a check mark on their data sheet? I would say yes, but you can safely ignore it when choosing your OpenStack distribution.

1Gbit Ethernet NICs are used to access OpenStack APIs on the controller nodes. Compute nodes and Ceph storage nodes are interconnected using 10Gbit Ethernet. All network interfaces are bonded and connected to two different switches to avoid a single-point-of-failure. There is a dedicated 1Gbit link attached to each of the OpenStack nodes used for node management via SSH.

Finally, we are going to take a look at the high-level overview of our OpenStack deployment. In the diagram below you can see the OpenStack projects that we chose for the deployment: 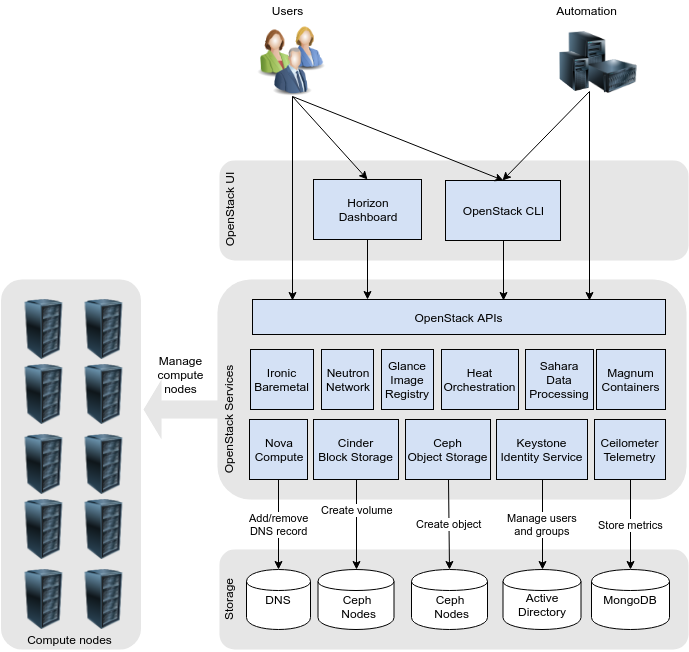 Let me comment on some of the projects we deployed:

In this post, we described some of our experience with planning the OpenStack cloud and deploying it. In the second blog post, we are going to share the lessons learned when operating OpenStack.

If you have battle scars from working with OpenStack, I would love to hear from you. Please, feel free to share your comments and stories in the comment section below.