The Kubernetes installer machine and both of the Kubernetes machines run on the CentOS-7-x86_64-GenericCloud-1605 image. You can download this image from the CentOS image repository. After I uploaded the CentOS 7 image into OpenStack, it has been assigned ID 17e4e783-321c-48c1-9308-6f99d67c5fa6 for me.

First off, let’s spin up a Kubernetes installer machine in OpenStack. I recommend using the m1.large flavor that comes with 8 GB of RAM. The compilation of Kubernetes is rather memory intensive.

To ensure consistent and reproducible builds, a Docker container is created at the beginning of the build process and the build proceeds within the container. So, let’s quickly setup Docker on our build machine:

Configure the Docker service to start on boot and then start it:

The Kubernetes build scripts expect that the docker command can successfully contact the Docker daemon. In the default CentOS configuration, the sudo docker is required in order to connect to the /var/run/docker.sock socket which is owned by the user root. To overcome the permission problem, let’s create a wrapper script that will invoke the docker command using sudo:

You can test your changes with the docker info command which should work now.

Next we’ll clone the Kubernetes Git repository and start the build. The quick-release make target creates a build for the amd64 architecture only and doesn’t run any tests.

After about 15 minutes when the build was successful, you’ll find the distribution tarballs kubernetes.tar.gz and kubernetes-salt.tar.gz in the _output/release-tars directory.

Setting up the OpenStack CLI tools

Install the OpenStack CLI tools that are used by the Kubernetes installer when creating a cluster with:

Next, you have to obtain your OpenStack openrc.sh file and source it into your environment:

You should be able to talk to OpenStack now. For example, check if you can list the available OpenStack networks with:

In this section, we’re going to more or less follow the instructions found in the chapter OpenStack Heat of the Kubernetes documentation.

When deploying the Kubernetes cluster, the installer executes the following steps that you can find in cluster/openstack-heat/util.sh:

Let’s create an openstack-heat.sh file with the configuration values for the Kubernetes installer:

The above configuration will create exactly one Kubernetes master and one Kubernetes node. It will inject the keypair called mykeypair into both of them. Note that you have to ensure that the keypair mykeypair exists in Nova before proceeding. You probably want to change the name of the external network to a network available in your OpenStack. We’re going to use the same CentOS 7 image for both of our Kubernetes VMs. This CentOS image has already been uploaded into OpenStack and in my case it was assigned ID 17e4e783-321c-48c1-9308-6f99d67c5fa6. You also want to change the IP address of the DNS server to something that suits your environment. The Swift server URL is the public endpoint of your Swift server that you can obtain from the output of the command openstack catalog show object-store.

When your configuration is ready, you can source it into your environment:

Next, in my environment I had a problem where the IP range of the private network created by Kubernetes collided with the existing corporate network in my company. I had to directly edit the file cluster/openstack-heat/kubernetes-heat/kubecluster.yaml to change the 10.0.0.0/24 CIDR to something like 10.123.0.0/24. If you don’t have this problem you can safely use the default settings.

The OpenStack configuration can be found in the cloud-config script cluster/openstack-heat/kubernetes-heat/fragments/configure-salt.yaml. You can see that this script will create a configuration file /srv/kubernetes/openstack.conf on the Kubernetes machine which contains the OpenStack settings. In my case, I changed the original block:

Besides adding the LoadBalancer section, I also appended the domain-name option to the end of the Global section, as in my OpenStack environment I want to authenticate against a non-default Keystone V3 domain.

After you’ve sourced both the openrc.sh and openstack-heat.sh environment settings, you can kick off the installation of the Kubernetes cluster with:

After about 25 minutes, you should have a Kubernetes cluster up and running. You can check the status of the Kubernetes pods with the command:

All pods should be running. The network topology of the Kubernetes cluster as displayed by Horizon: 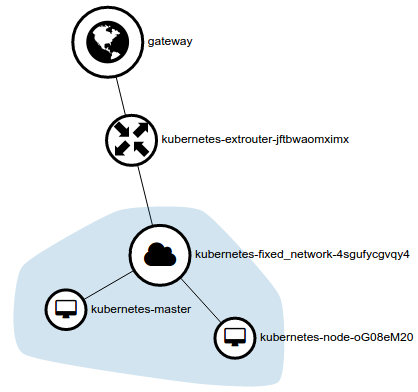 At first, we will copy the kubectl client binary from the Kubernetes installer machine onto the remote host from where we are going to access our Kubernetes cluster:

Remember to replace the remote.host.com with the name of your remote machine.

Next, we’re going to start a kubectl proxy to allow access to Kubernetes APIs and the web UI from the remote host. The proxy can be brought up directly on the Kubernetes installer machine using the command:

The proxy listens on port 8080 on all network interfaces and accepts connections from remote hosts with any IP address. This configuration is very unsecure but is good enough for our test environment. If your Kubernetes installer machine runs on the cloud, you might want to modify the security group rules to provide access to port 8080.

Now, we can access the Kubernetes APIs from the remote machine using the command:

The web UI of your Kubernetes cluster should be available at the URL: